Regulators have waited too long to act on so-called stablecoins, to the point where exposure to schemes like that being run using Tether has infected the entire digital asset industry—and even beyond it.

This is thanks to a network of exchanges which surround and rely on Tether and who perform a vital role in Tether’s ability to mint new USDT and get them to market, all while maintaining a paper-thin illusion that the so-called stablecoins are backed by anything at all. In return, the exchanges get to sell the apparently value-less USDT in exchange for BTC.

That the scheme has been so successful that companies like Bitfinex, Binance and FTX—the largest recipients of newly minted Tether—have been able to enjoy unprecedented growth in the current digital asset boom. These companies have been able to leverage this growth into all kinds of extrinsic partnerships. For example, FTX just paid $135 million for the naming rights to American Airlines Arena, home to the Miami Heat. Eric Woolworth, president of The HEAT Group’s Business Operations, said:

“FTX.us is an exciting, young company in an emerging category of the financial services industry that continues to grow at lightning speed, and we are ecstatic to welcome them with open arms to the Magic City.”

But if the growth is being supported by the endless printing of USDT without any real backing, then it’s only a matter of time before the market realizes this—and the whole charade comes crashing down. Miami-Dade had better hope they took payment from FTX up-front.

Remember when Tether released its one-page reserve report, showing that 74.85% of Tether’s reserve was in “cash and cash equivalents” Only 3.87% of that was cash. The majority is designated as what Tether calls “commercial paper” (65.39%), accounting for 49% of the entire reserve – the single biggest constituent.

Commercial paper is a type of short-term and usually unsecured debt, typically issued by one entity to another to cover short-term obligations. Critically though, there’s another category in Tether’s breakdown which covers secured loans, and those are specifically designated as not given to affiliated entities. This implies that the other categories (including commercial paper) may be with its sister company, Bitfinex.

Tether is something of a nexus between many players in the industry, both large and small. This is something that Tether would like to keep quiet: in fact, up until 2017, Tether and Bitfinex were still insisting that there was no relation between the companies: we now know that they are owned by the same parent company, iFinex.

But Tether’s inner circle is clear as day if you can see where the newly minted USDT go once they leave Tether. Twitter user LucaLand97 tracked the journey of tether’s monster $1 billion mint back in February: 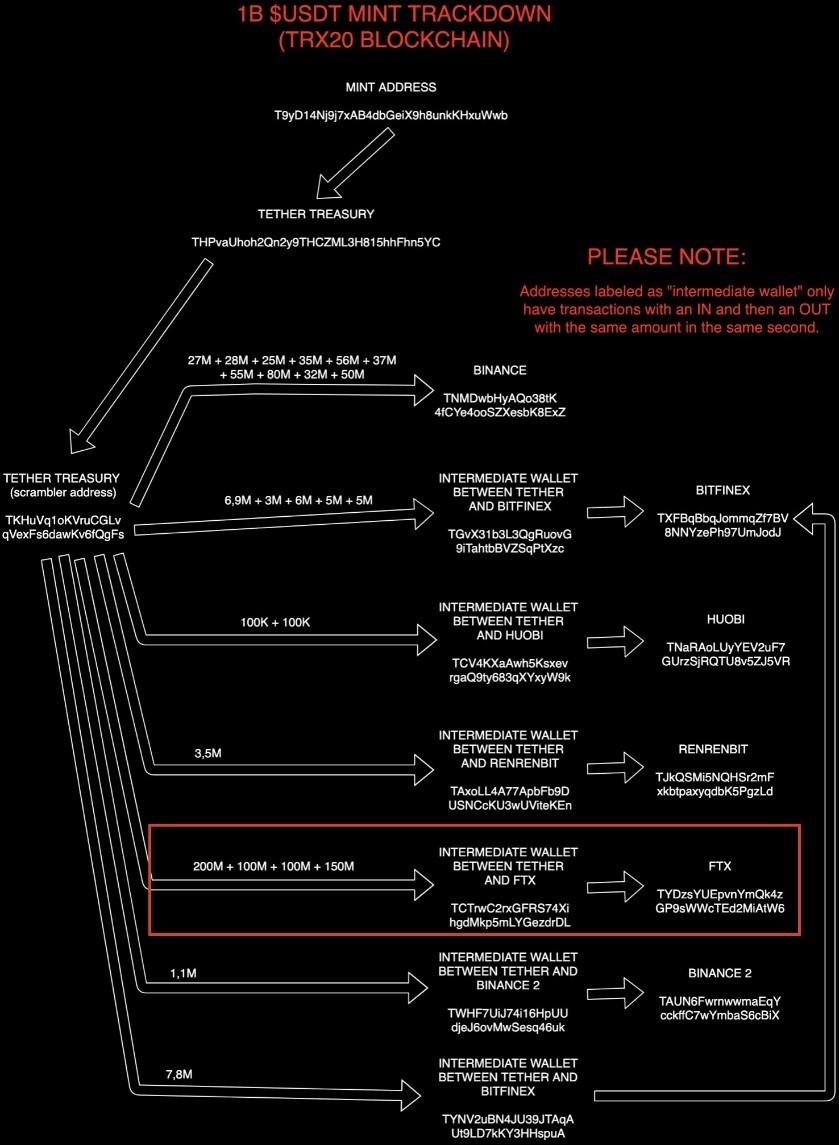 The largest destination for this particular print was FTC, an offshore exchange.

What happens to the Tether once it lands in the wallets of these select few exchanges? In theory, Tether should only be being minted in accordance with demand from investors using USDT as a medium of exchange to introduce their fiat capital into digital assets without needing to sacrifice the stability afforded by the dollar.

However according to a study published in The Journal of Finance in 2020, this isn’t what is happening at all. The study found that in the case of Bitfinex, more than half of the exchange of USDT for Bitcoin at Bitfinex is associated with one large player, which would indicate that the USDT which propagates throughout the market is not the result of many investors using Bitfinex to purchase USDT for cash:

“Following periods of negative returns, Tether flows from Bitfinex to Poloniex and Bittrex, and in exchange, Bitcoin is sent back to Bitfinex… When there are positive net hourly flows from Bitfinex to Poloniex and Bittrex, Bitcoin prices move up over the next three hours, resulting in predictably high Bitcoin returns. The price impact is present after periods of negative returns and periods following the printing of Tether, that is, when there is likely an oversupply of Tether in the system.”

“This phenomenon strongly suggests that the price effect is driven by Tether issuances. Additionally, the price impact is strongly linked to trading of the one large player and not to other accounts on Poloniex, Bittrex, or other Tether exchanges.”

It isn’t known what Tether is accepting from these platforms in exchange for the USDT (though in the case of sister company Bitfinex, we can see from the NYAG’s complaint that the two send enormous amounts of assets between one another without so much as a second thought). This is the kind of thing that would be almost immediately identifiable if Tether would actually release a third-party audit, but in light of the gaping holes in Tether’s account of its reserve, one has to wonder if the ‘payment’ for newly minted Tether is finding its way into Tether’s reserve as ‘commercial paper’ or even worse, as digital assets.

People hold Tether because they assume it is fully backed by Tether’s cash (or these days, cash equivalents) reserve, but if that USDT is being used—as shown by The Journal of Finance study—to purchase BTC, then the price of BTC has depended—for years—on how much USDT is being minted at a given time. For what it’s worth, Tether has more trading volume than the next three – BTC, ETH and XRP – combined.

What started as worried speculation has morphed into awareness of an impending crisis in the digital asset industry and in particular the BTC community. If you still aren’t convinced at the industry-wide (and beyond) exposure to Tether’s scam, documents revealed by the NYAG investigation show that CFO Giancarlo Devasini was worried about this precise thing should client withdrawals be suspended from Bitfinex:

These select exchanges form a critical pillar of the Tether scam. Tether is in the business of printing money, but exchanges like Binance and FTX are where the USDT is turned into real value. Therefore, it’s in Tether’s interests to rescue these entities in times of need.

Like earlier this month, which saw a digital asset sell-off which wiped 50% of digital asset prices almost overnight. In the ensuing chaos, on May 21, The Block reported that FTX was suddenly in the middle of a funding round worth up to US$1 billion. Despite the report being supported by three unnamed sources, there is no hint as to who is leading the funding round and details on its purpose are vague. It’s worth pointing out that Binance, another of Tether’s inner circle entered into a strategic partnership with FTX in 2019, involving an equity investment into FTX. Under the partnership—and probably the key thrust of the arrangement—‘FTX will also help build out the liquidity and institutional product offerings across the Binance ecosystem’.

The very next day, on May 22, Tether minted 1 billion USDT.

The answer to this mess is stablecoin regulation. Tether has managed to reach its current position in the market by disguising itself as a stablecoin—something which Tether itself used to define as a coin backed by cash reserves at a rate of 1:1 – and one look at Twitter will tell you that those who purchase Tether do so on that basis. However, in reality, the true makeup of Tether’s reserves are anyone’s guess. Even taking Tether’s pie charts at face value, we can say it holds no more than 4% of its reserve in cash.

Tether general counsel Stuart Hoegner seemed to attempt to excuse this in the affidavit he submitted to the NYAG in their investigation when he compared Tether’s model to the fractional reserve system employed by banks. Hoegner no doubt regrets ever inviting the comparison, because the level of regulatory oversight and public disclosure attached to banking entities would be the end of Tether’s charade of backing.

And yet, without a regulator to speak of, Tether’s business continues mostly free of oversight. Which, presumably, is a large reason why in December 2020, U.S. Congress proposed the “STABLE Act,” legislation which would require stablecoins to obtain full banking licenses and comply with existing banking regulations. The Act would certainly have precluded Tether’s every changing story about just what assets—if any—are backing USDT.

Unfortunately, any action—either from legislators or law enforcement—will now come far too late to save the digital asset markets from the Tether timebomb, the blast radius of which starts with Tether’s inner circle of exchanges and now stretches beyond the industry and as far as the NBA.

Follow CoinGeek’s Crypto Crime Cartel series, which delves into the stream of groups—from BitMEX to Binance, Bitcoin.com, Blockstream, ShapeShift, Coinbase, Ripple and Ethereum—who have co-opted the digital asset revolution and turned the industry into a minefield for naïve (and even experienced) players in the market.